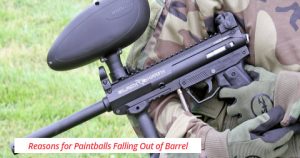 Players who start playing paintball often use second hand equipment due to which they face some problems. As I had to face myself, paintballs used to fall out of my barrel, which I realized in time and now I want to share with you why.

There may be other reasons why paintballs fall out of your barrel.

Why Are Paintballs Rolling Out Of My Barrel?

“Ball Detent Is Broken or Missing” and “Paintballs Are Too Small For Your Barrel” are two major reasons why paintballs can fall out of your barrel.

Now it is challenging to figure out which of the two is causing this problem. You will have to read further to find out, after which you will be able to know the root cause of this problem and how to fix it.

Ball Detent Is Broken or Missing

Ball detents come in many different shapes and forms, but all do the same thing. On an open bolt marker this keeps the ball in the breech, meaning the paintball does not roll out the barrel.

This prevents double feeding on closed bolt markers. This does not prevent the ball from rolling out the barrel because when the bolt is pushed forward, waiting to be fired, the paintball is already past the detent.

There are two different types of Ball Detents – Expendable and Rebuildable, which I will go into detail below.

Paintballs Are Too Small For Your Barrel

If you have a paintball gun with a closed bolt, paintballs may be falling out of your barrel due to overboring. Now a question is how to know if you are overboring or underboring?

Drop the paintball down your barrel to see if it is stuck, if so you are currently underboring your paintballs. And if the paintball falls straight to the ground, you might be overboring.

Now drop a few more paintballs through the barrel to make sure they all fall straight. If one falls and the next one doesn’t, your paintball might be the same as the size of the barrel.

Underboring is when you use a barrel with a bore size slightly smaller than the bore size of your paintballs and overboring is its opposite.

How to Stop Paintballs Falling Out of Your Barrels?

Below we have mentioned some steps that can help in solving this problem.

1- Check the Caliber Size of the Barrel and Paintballs

First you should check the size of both the caliber and the paintballs, and only use paintballs that are the correct size for your marker. Because if you want paintballs not to fall out of your barrel, this step is very important to follow.

2- Do Inspection of Paintball Guns

To fix this problem you should perform a self-inspection of your gun at least once to determine if there are any internal malfunctions.

To fix the problem, you can try cleaning or replacing the hopper, feeder tube, or paintball gun. If you’re not so sure, you can take the gun to a field expert or your nearest shop to have it professionally inspected.

3- Fix a Worn Out Ball Detent

Here is the video to change the ball detent in a paintball gun.

As we have explained the main reasons why a player’s paintballs fall out of the barrel. These include a broken or missing ball detent, or the size of your paintballs not matching the barrel.

If you are sure that your paintballs are falling because of the ball detent, then you need to fix it or replace it by following the above method. It often happens that we fail to place the ball detent correctly while maintaining our marker.

If you’re having this problem for another reason (the paintballs are too small for your barrel), just buy the right size paintballs or buy a smaller bore barrel.

If you’re in the field and want a quick tip, pump your gun only when you’re ready to fire, otherwise don’t pump it and don’t point your marker toward the ground.