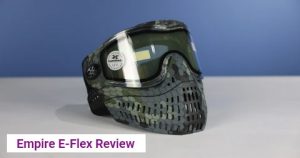 It has a perfect lens which works nicely and looks perfect. Furthermore it has a great ventilation system which not only provides an easy way for breathing but also allows their players to communicate with each other without any voice distortion. The empire e-flex with various benefits but beside it also has some disadvantages.

In this article, we will help you to figure out that empire e-flex is right for you not. And to kick off this review, we’re going to start with the Empire E-Flex best feature breathability and what drives most players to buy it.

Some would like to watch the video, instead of reading an article. So for those people I am embedding a video and this video has all necessary things that you need to know.

You will get the following benefits when you use an empire e-flex. These features are easy to remove lens, flexible mouthguard (boosts bounce and makes aiming easier with the mask on) and comfortable. I have described its benefits in detail. You can read them.

My friend and I started to play paintball in 2013 and we started with cheap paintball guns and masks which barely hold themselves together. The first thing that I did before buying my first ball gun was buy an affordable paintball mask for myself with a huge bubble lens – The Vforce profiler.

V force profiler is still considered a great mask for price and performance but I feel very difficult while breathing may it due to my low tolerance. After the hard running and rushing to the closest exit point the first thing I did was take off my mask.

After some years I randomly tried an Empire E-Flex and immediately I fell in love with it. I was using it for the first time and I really wondered by testing its ventilation process which allowed me to take breath smoothly just like I felt when I wasn’t wearing a mask at all. After that it becomes my permanent choice.

It’s also easy to remove lens features in the Empire E-Flex. I was a JT Proflex user before the Empire Eflex and removing the lens to clean or replace is not an easy task for me. But now Empire has fixed that pesky problem by making changing lenses so easy, it won’t take you more than 30 seconds. To change the lens you must first lift up the tabs inside the left and right ear cups.

Each tab will have the words LIFT at the top of the tab and L (left) or R (right) at the bottom of the tab. Once the two tabs are removed, the next step is to tilt the ear cover upside down until you remove the other two pieces of plastic that hold the ear together. The L or R will be mentioned on the plastic pieces inside the mask and the Empire logo on the outside of the mask.

You can easily remove the lens from the mask when you remove the two plastic tabs that hold the ears to the mask cover. When you’re ready to put the mask back together, just undo the whole process we did. The entire process will take no more than 40 seconds.

The other reason why I like the empire e-flex is because it has a flexible mouthguard and almost all the experienced players would love to use those mask which have flexible mouth guard because they have capability to promote the paintball bounces and allow me to push my face back near to the stock. It gets my eyes behind the sight or scope.

The empire e-flex is highly comfortable to wear. The foam used inside is extremely soft and players feel it mold their faces when they wear it. Furthermore, the ears of the mask are comfortable too. Normally people complain about the ear of paintball masks but empire e-flex have good ears. But the mask’s back strap isn’t anything special like the Dye I5’s, the silicone print helps keep it from slipping on the back of your head.

In the above section, I have discussed both advantages and disadvantages of empire e-flex which will help you to figure out if this mask is good for you or not.

In my opinion, it is a good paintball mask for the player, the only thing I did not like is that the little bit of the nose of the mask came into your way of vision which slightly created a disturbance. If your first priority is sight/vision instead of ventilation then you have many more options like Dye i4, Dye i5, Empire EVS, Push Unite, or even the V-Force Grill or even Profiler. All of these have a great field of view but none breathable like empire e – flex.

One more downside to the Empire E-Flex has to do with the manufacturing side of things, and that’s because there’s a good chance to stop the production of the E-Flex. I also notice, there is certainly a lack of variety if we talk about its colors but I don’t know if it is true or not but I notice this thing.

Still, there is great fan following of empire e – flex and JT Proflex even proflex have multiple facebook groups for owner and BST. These will allow you in future to buy proflex if it becomes discontinued.

For now, don’t worry about it, Empire e flex is still available on various site you can buy it from amazon.com at a cheap price as well.

I am an energetic content writer living in the United States of America, working on many famous paintball blogs and other surfing sports all around the world with an open mind and honesty. My good thing is that I really enjoy the sun, beach and other hard work activities like swimming, boating and climbing.