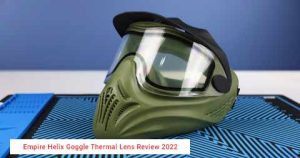 If you are not a newcomer in paintballing then it might be possible that you have passed through the experience of fogging up your mask in the middle of a game. You are passing a time of your life while running and gunning through the woods and suddenly you know that your paintball mask’s lens has fogged up and you are bugging to see your enemies.

Whenever this happened, you needed to lay down in some specific place and hide yourself from enemies until you could not clear fog from the lens. Wearing a scarf to breathe and sweat beneath your mask can help you to solve this problem a little bit, but it won’t be a long-term solution if your goggles are cheap or damaged.

What will happen if i tell you that you can get the best paintball mask with high end lens like empire E – flex and E – vents in only one fraction of the price. Will you believe me or not ? But it’s true. You can buy an empire helix paintball mask with an anti fog lens for just 5$ or more than what the actual lens itself. So in other words you’re paying for a paintball mask. But please see the prices because new prices may go up.

Usually it would not be considered a good idea to buy a cheap paintball mask, the thermal lens on an empire helix is not a suitable thing for beginners. Even if you want something better later down the road then you can keep the Helix as a backup mask or can also use this mask to give as a loan to your friends.

For sure, the empire helix may not come with all the functionality which you will find from E – Flex and E – Vent but it has some enough features that helps you to play the game with full potential.

The lens on empire helix have better results than lenses used on other low price masks because the helix uses a thermal and dual pane lens that is much less likely to fog while other most beginner paintball goggles use a single pane lens with anti fog coating.

The addition of another much thinner lens behind the thicker outer lens that is already used for extra protection makes the helix thermal lens more resistant to fog. These two lenses are separated by foam gasket and allow a thin layer of air to pass in between them. The thin layer of air works as an insulator and keeps the temperature between two lenses from varying too much. It ensures that your lens will never fog up unless you are playing in extreme hot or humid weather.

On the other hand, with the single pane lens as the heat and moisture entering inside your mask comes into contact with the cold temperature of the lens, condensation begins to form almost immediately. To protect your lens from fog is one of the best aspects of empire lens. Furthermore, it is one of the perfect lenses for providing you a peripheral vision 360 field of view. If you have a habit of playing with a small lens’s mask then be prepared to feel a huge difference when you finally strap them on.

Lens is the most important credential of paintball mask as well the mask itself is highly important. There are many chances to get hit by paintballs on your ear or lower jaws due to exposure of your face if you are using a low budget mask. This risk is far less when you are using an empire helix and even many consumers noted that it may not fit on a large head.

One more thing you have to worry about when you are buying a paintball mask is a goggle strap. The goggle strap is also called a back strap and its responsibility is to keep the mask tight and secure on your face all the time. If you ever use some cheap mask that is included in the beginner package then you will probably have an idea how the strap can slide around on your back of head.

The backstrap of the empire helix is highly well made and comes with silicone beading to keep tight and prevent it from moving around. It also has a chin strap which increases the further security for your face while playing. One more feature which enhances the mask security system are removable visor and hard plastic body.

It’s nice to see that the Empire put some thought into the construction of the visor so there’s very little space between the visor and the top of the paintball mask, reducing the chance of a paintball getting inside and hitting your forehead. And while the hard plastic body may not be great for bouncing around, it certainly does a great job of protecting your face.

Are you tired of wearing a paintball mask because your glasses drag to the sides of your head while you play ? It is great in empire helix that the foam is separated into two pieces to leave the slot for your glasses frame to fit into. Still there is so much space left behind the lens as well which enables you for the thickest frame to adjust easily.

One quick view at empire helix’s review and you will get a very good estimate that this is a very good paintball mask for beginners. If the consumer’s review is not enough to convince you to buy it then you can go to consumers of Invert Helix as well. Both companies are runed and operated by Kee Sports since achieved by GI Sportz, so they are basically the exact same mask – differences occur only in logos.

No doubt, every review of empire helix paintball masks will not be positive. Some customers are not happy that foam was uncomfortable and would often sweat profusely while playing. Somewhere I also agree with them, but I can also say that helix’s foam is much better as compared to other masks available in the same price range. So in my opinion, you should buy replacement foam to fix this issue if you are really uncomfortable.

Another complaint you will hear about empire helix is that it does not have good ventilation. Although the sad reality is that helix also have side vents as well until their manufacturers did not decide to change the mask shape. When you go online to purchase an empire helix still you will see its old pictures with side vents but unfortunately you will not get those paintball masks now.

Aside from the foam and ventilation, there’s not much you can complain about when it comes to the Empire Helix. But for the price, this is one of the best paintball masks you can buy as a beginner and works great as a backup or to lend to your friends. Many athletes and expert panballers who own E-Flex or E-Vents can actually get an extra mask every time they need new lenses. They just put their old lenses into the Helix and then they have another new mask and they don’t have to waste a lens.