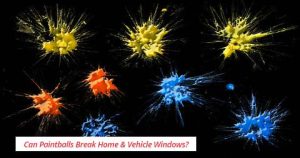 Here we will look at whether paintballs can break glass, house windows, car windows, and whether paintball is a dangerous activity. To what extent a game played just for fun inside and outside the house can harm us financially.

Apart from us, there are other neighboring houses in the society who do not allow such games to be played outside their house because there is a risk of getting shot anywhere, including their car, even themselves.

So before playing outside, it’s important to know if paintballs can actually break glass.

The strongest type of glass is tempered glass which is less likely to break when hit by paintballs of any speed, tempered glass is 4-5 times stronger than normal annealed glass. While laminated glass is more prone to breakage, it will break but stay together because of the plastic layer that is baked between the two pieces of glass.

Paintballs are not designed to break a house window, but if someone hits them at the right angle, they can break windows. However, there is always the risk of cosmetic damage such as paint stains in the glass. Nowadays, there are several types of glass installed on the windows of houses, some of which cannot be damaged by paintballs, but most of them are broken by it.

Paintball players who are interested in this game should play in an open field because most of the nearby houses use annealed glass which cannot withstand the force of paintballs.

Home windows are based on single or multiple layers glass, if they are single-glazed, they can break immediately, but if they are multi-glazed, they can withstand paintballs hit. Distance is the important scenario in this situation, such as how far the paintball gun was from the window and what its pace was.

Besides that, paintballs can damage windows in several other ways.

As every enthusiast knows, paintballs are made of a hard shell and filled with paint, so pressure can crack the shell and cause paint stains.
Moreover, paint used in paintballs are based on solvent paint which can cause more damage if we do not clean them from windows instantly.

There are several factors that can determine whether paintballs break a car window, including the weight of the paintball, barrel length, wind speed, air density, and therefore ambient temperature.

The Weight of Paintball

It is a universal principle that if we throw a light object and a heavy object with the same force. So an object with less weight will go faster and hit the object in front with more force and be more efficient. In the case of paintballs too, lightweight paintballs have a higher velocity than heavy paintballs and therefore a lighter ball is more liable to damage.

Length of the Barrel

Barrel length can also decide whether or not paintballs can break car windows, the longer the barrel, the faster the speed of the paintballs. Paintballs fired from long barrels have a higher chance of damaging car windows.

Speed of the Wind

Crosswinds are blown from right to left or left to right between the paintball and the target, causing the paintballs to deflect horizontally. You can also claim that these winds caused the paintball to go in the direction of the target.

These tailwinds are directed towards the target. As a result, it causes special damage.

Winds will have a big effect on speed. Although the distances will change, if the wind direction is directly behind or in front of you, you will hardly feel their effects. Crosswinds will definitely be easier to see at speed.

Yes, frozen paintballs are more likely to break glass than regular paintballs. Remember paintballs don’t freeze just by putting them in the freezer. Although the shell hardens and the paint thickens into a goo-like substance, it is nowhere near solidification.

Now if you want to go to the extreme, you can place the paintballs in a cold freezer or in liquid nitrogen which will solidify them. Frozen paintballs will still be very difficult to shoot because they will be misshapen and won’t fly straight.

There are some safety precautions that everyone already knows about so just a reminder:

Alexa is a content writer and staker who is in the United States of America and working on many famous blogs and also concentrated on staking skills and other surfing spots all around the world. Her one more good thing is, she enjoys the sun, beach and other hard work activities like swimming, boating and climbing.