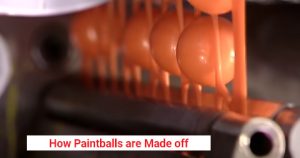 Here are some ingredients used in paintballs:

Other ingredients which you may find in paintballs:

How Paintballs are Made Off

Paintballs are made entirely of non-toxic food grade ingredients to create a hollow shell. First, water is poured into a large hot mixing bowl, which contains a secret combination of sweeteners and food ingredients that the company won’t reveal, then the main ingredient that gives the shell its shape, gelatin. The kind used to melt the gummy bears and mix everything for half an hour then line it up for what they transfer the gel from the mixer to a hot VAT called a gel tote.

They filter out any globs that didn’t melt. Once the gel is securely in the tote they lower in a giant blender. They pour in a food dye and blend for about 20 minutes elsewhere in the factory. They use the same method to dye what’s called the fill the paint that goes inside the shell of the paintball. It’s made of polyethylene glycol the inert liquid in cough syrup they thicken it with crayon wax

The gel and fill meet their maker in what’s known as the feed room here the vats of gel and fill feed a capsulation machine one floor below. This machine is the same kind used to make bath beads and gel cap medicine.

First the machine spreads out the gel onto a cool drum that creates a continuous thin sheet of gel called a gel ribbon. This cooling cures the gelatin to the point where it can now be molded  into the hollow shell of the ball.

The newly minted paintballs are quite soft though if they’re not dried out they’ll lose their shape. so they fall down onto a conveyor then roll into a tumble dryer, from here they’ll go on to a bakery style rack until they dry out completely.

What are Paintball Shells Made of?

Initially, paintballs were manufactured by pharmaceutical companies. This is because these were the companies that made the pills using the capsule method. These companies made paintballs using the same process used to make liquid bullets.

Paintballs are now made from gelatin, the same ingredient used to make marshmallows and jello.

Gelatin comes from the skin tissue, bones and collagen fibers of dead animals. Paintball jelly usually comes from pigskin. It is mixed with a plasticizer that increases its stability and makes it more moldable.

How to Make Paintballs at Home

There are no hard and fast rules for making paintballs and no chemical mixture is used, if you really want to make them at home then you can do so by following the below mentioned procedure and ingredients.

Following are the ingredients and things you need to start the process:

It is very important to check if the paintballs are made properly after following the above procedure and making them at home. The following items can help you make paintballs at home.

Spherical shape of paintballs is recommended, oval or any other shape will cause problems during shooting. Because paintball guns only fire perfectly shaped paintballs, keep a spherical shape if you want smooth shooting.

It should not be too hard and too soft, otherwise it will not break after the shot and it will hurt more when it hits the body. On the other hand, soft paintballs will not roll properly, and will have bristles inside. The size and hardness should exactly match what we buy from the market.

All paintball equipment is made after many experiments. It is very common that paintballs are likely to get into the players mouth during the game, so they are made from non-toxic food grade material, But they are not edible.

They are “osmotically active,” which means they draw water from the intestinal tract and can cause severe electrolyte imbalances. It can be fatal. So you should always keep them away from children. And also take care that your pets such as dog, cats do not put it in their mouths, it can be very toxic to cats and dogs. If your dog or cat has eaten paintball, immediately It is best to get veterinary treatment. A few years ago one of my dogs also swallowed it when I was playing with my family.

Can You Eat Paintballs

Can you eat paintballs if they are non-toxic and made from food grade materials? Of course not, although most of the ingredients used to make paintballs are edible, it is not recommended that you eat them. They are rumored to taste bad, plus you can never be sure what other ingredients they might contain, since they are not intended for human consumption.

I was reading online that if you freeze paintballs they hurt more, they can damage your lenses. I would probably disagree, knowing that we did freeze some paintballs and personally tested it and compared the effects of unfrozen and frozen paintballs. We went out shooting then we shot with frozen and unfrozen paintballs to compare the difference.

How to Clean and Store Paintballs

Unused paintballs must be stored in a dry and clean place, I Personally use airtight containers and ziplock bags. A paintball that is not stored properly will become sensitive, if the paint cools it will harden and break. When it goes through the barrel of a gun, it will cause problems. If they are too hot, they will soften and not crack on impact.

Note: Unused paintballs should be kept away from chemicals such as gasoline or solvents. During storage make sure you rotate them after a few days so they keep their shape and don’t flatten.

Paintballs are not bad for the environment because they are biodegradable. They are non-toxic and break down naturally over time. If players clean up their boxes, used batteries, and trash, the area will be cleared and no damage will be dealt.

Alexa is a content writer and staker who is in the United States of America and working on many famous blogs and also concentrated on staking skills and other surfing spots all around the world. Her one more good thing is, she enjoys the sun, beach and other hard work activities like swimming, boating and climbing.