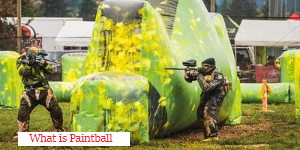 I’m going to share with you my experience with paintball over the past few years to find out what kind of game it is. Of course, many questions will be arising in your mind like a normal person such as, is paintball a sport or a hobby? If it is a sport, does it meet the criteria of an Olympic sport? What are the different variations of paintball, etc.? Let’s start quickly without wasting your valuable time.

Paintball is an exciting and amateur sport that is played all over the world at national, international and state levels.

It is played on two types of grounds, indoor and outdoor. However, it is up to you which choice you prefer. It does not specify the number of players as it depends on the size of the field but the ratio of both teams remains the same.

What Exactly is Paintball?

Let me tell you in simple words that paintball is one of the fun shooting  games in which you have to target your opponent’s body and gun with non-toxic paint balls. As soon as the paintball is hit, the player will cease to exist. You have to eliminate the existence of one player after another to win the match with team collaboration. If you want to join the police, and National forces, then this game will help you more in training to overcome criminal activities in your country.

Moreover, No matter whether you are righty or lefty, To shoot your opponent take a position, put the index finger on the paintball gun trigger, and press it.  By doing this, with the help of pressure inside the barrel, the paintball will come out and hit your target directly.

Is Paintball a Sport

Paintball is considered very popular in the richest countries of the world. According to an estimate, it is not only a sport but also a hobby for people. As much as cricket and football are important in the world, paintball is no less than these sports. This professional game enhances players’ decision-making power and allows them to think broadly to overcome stressful situations, especially for kids.

Paintball as a Hobby

For a long time, it has been shrouded in a debate whether paintball is just a sport or also a hobby. Some experts believe that paintball is just a hobby because it is not getting the status of an Olympic sport due to which the importance of their professional level is eliminated in their eyes. This Recreational activity makes your day happy and memorable which remains in your mind till the end of your life.

Paintball as a hobby teaches you a lot of things and makes you enjoy it at every stage of life.

Paintball as a Sport

Some paintball enthusiasts consider it a sport because they believe that paintball is the same as other sports (cricket, football, etc) in which we beat our opponents and prove we are skillful from them. Some experts review that Paintball’s a bunch of buddies getting together but on the opposite side some think that it’s just something to pass time pushing yourself to the limit in terms of physical performance.

The teams on both sides adjust their positions and on the referee’s call, they shoot paintballs at their opponents with the help of compressed air guns. So, Before starting it you have to be prepared mentally and physically for every light and tough situation which you can face during the game.

There are multiple ways to play paintball such as tournaments and bachelor parties. Paintball as a game is also a great activity for bachelor parties where you can release all your stress and enjoy this fun activity at your favorite paintball parks. Additionally, many cities organize tournaments to find a list of professional players who can play for their country at the international level.

Does Paintball Meet the Requirements as an Olympic Sport?

It was shocking news for me when I heard that paintball is too far from the olympic game. But when I did deep research on it, I found out that Many sports in the world are not considered Olympic sports, and paintball is also one of them. First of all, to be a part of the Olympic, it is necessary to have an international governing body for the game, but unfortunately, paintball is not determined by the (IOS) and does not have a governing body.

What are Some Different Paintball Game Variations?

A paintball player must know the basic variations before starting the game because the whole game is based on these rules and variants. The main component of this game is to capture the flag, whether the team gets it by eliminating the opponents or by sneaking. Keeping this particular goal in mind, various variations of paintball have been created.

Woodsball is a popular type of paintball where players are given a wide field. Some fields are designed with a forest look to give the players a sense of hunting. Woodsball is a slow-paced game and the markers designed for it don’t hit players badly. In my opinion, you can also organize a birthday party in this field with your friends and family members to make your day more special.

This fast-paced game is another popular type of paintball where you have a very narrow field for playing. From the field to the weapons, woodsball and speedball have nothing in common. Speedball fields are prepared in rectangular and square shapes with the help of spools, pallets, tires, and corrugated pipes and something more like that. If we talk about speedball weapons, they are completely antonyms of woodsball.