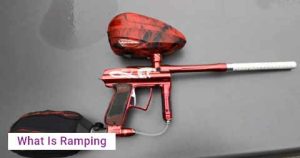 Ramping is a method of firing on most modern tournament weapons that will engage fully automatically at a set rate of fire as long as a minimum number of pulses per second is achieved and maintained. Entry PPS and Sustain PPS values are not necessarily the same. Ramp ROF can also have different values to turn the eyes on or off.

Basically, it allows you to shoot faster than you pull the trigger. As you can see in the graph, once you go above the minimum bps (balls per second), it “goes up” to a higher bps. It is slightly more efficient than Auto because it uses less paint, controls your bps more effectively, and allows more bps than normal hair.

What Does Ramp Mode Mean?

Ramping is a shooting mode commonly used in tournaments. Electronic markers are powered by a small computer inside the marker, which means there are many different shooting modes that can be programmed. Ramp mode allows a player to easily reach and maintain a fixed rate of fire, such as 10 balls per second.

How Does Ramping Work?

In most cases, this incremental firing mode will continue as long as you keep pulling the trigger. But keep in mind when you stop pulling the trigger (mostly when reloading), you’ll need to start this ramping process again to get the firing speed back up.

Why Would You Ramp In Paintball?

When you’re trying to trap someone in a bunker, the more paint you can throw at them, the easier it is to trap them behind the bunker. It is in your favor to fire as many balls per second as possible.

If you’re playing for a tournament, fire according to their rules. Playing in the public arena is usually done by someone who doesn’t have the skills to win against players who are competing on equal terms. So instead they use ramps to kill the competition and feel powerful by taking out players from the other team.

Is Ramping Legal in Paintball?

Yes, ramping is legal within paintball, but it should be expected when playing in a tournament, as the volume of the paintball is impressive. In professional sports and contexts, it is legal and common for athletes to increase faster than permitted with supervision.

PSP Ramping, NXL and Millennium, are ramping modes in Paintball. The purpose of these specific ramp modes is to allow the player to shoot paintballs in auto fire mode. These standard ramp modes also ensure that paintball firing does not exceed the official limit of 15 paintballs per second or “bps”.

To combat the difficulties of implementing semi-automatic rules, some leagues allow specific ramp modes. This rule specifies a minimum time between shots of 66 milliseconds (about 20 shots per second), and that no more than one shot can be fired for the first three pulls of the trigger. Rate of fire is implemented by a device called the PACT timer, a standard firearms timing device that measures the time between shots.

What is PSP Ramping?

In PSP ramping, you can start shooting faster which will trigger the boost. If you release the trigger for a short period of time to start shooting rapidly, the gun will continue to fire in its “ramp” state.

What is NXL Ramping?

NXL firing mode is a ramp mode and only works with electronic markers, if you pull the trigger 5 BPS (5 times per second), the trigger will fire 10.5 BPS.

What is Millennium Ramping?

Millennium Ramping is similar to PSP Ramping, except it won’t have Ramped Mode. After you release the trigger for that brief moment, the ramp is disabled and will remain disabled until you start firing rapidly again.