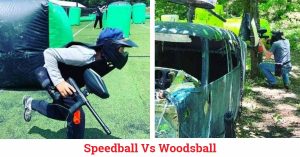 There are two main ways to play a paintball game: speedball vs woodsball. It is a really famous and stimulated outdoor sport which is also beneficial for human health. Here we will discuss in detail the difference between speedball paintball and woodsball paintball.

Both of them are different in size of playing field, terrain, team size, weapon, firing rate and many other things. Speedball paintball is a fast and speedly elimination game while the woodsball is a slow tactical game and takes many hours for players to complete it. In the following section we are going to explain their differences.

Woodsball Bunker and Size of Field

In this type of paintballing, the size of paintball is usually small because there is no natural environment in it, the players have to play in artificial circumstances with a huge amount of colorer bunkers and flat terrain surface. The players can move these bunkers anywhere in a speedball field. These fields have been made artificially in the buildings and other big places.

The team size of woodsball is larger as compared to speedball, if you have more than 20 plus or 100 plus then you should go to play a woodsball because in woodsball you are able to spread your team in a large area.

This type of paintball is just like a test match of cricket where you need to play it slowly and slowly make strategies to eliminate your enemies from the game. This is a very large field with native hiding places. With all these things you should also save your energy until you do not save your opponents.

It is a large circumstance game and you are not able to convey your voice to your teammate, so here you have to use walkie tacky or some paintball mask with wireless sound system. With these things you can contact your mate and make various strategies according to the situation of the game against the opponents. You can also check our top paintball mask with an evocation wireless system.

This field requires different strategies to win the game, due to their large area the team has split into different areas and make a plan of action to attack on the enemies from various places and sometimes there is also need to change the plans. The most necessary thing about woodsball paintball is communication and making sure that your device is working well because it is the backbone of the woodsball game.

In this environment you can use full face coverage woodsball mask as well as partial face coverage mask, but i suggest you to use that which have good evoke wireless system which increase the excitement and communication between the players. You can also use a fogless mask which provides you 270 clear and peripheral vision and protects you from ultraviolet rays.

Woodsball paintball guns have long shots capability and it looks like a blackish military type and you can target your opponent from long distance and it can produce many paintballs per second that is a great thing for players.

It is important to protect your knee and elbow from rashes while playing paintball. You can prevent yourself from using pads.

Speedball Bunker and Size of Field

In this type of paintballing, the size of paintball is usually small because there is no natural environment in it, the players have to play in artificial circumstances with a huge amount of colorer bunkers and flat terrain surface. The players can move these bunkers anywhere in a speedball field. These fields have been made artificially in the buildings and other big places.

It requires only 7 to 10 members because it is small in size, its artificial environment made inside the building with different management.

It is a fast game due to its small place and contains full action and speedy movement. In which all opponents are near to each other and only those players who can show faster movements otherwise they will be bitten by their enemies easily.

In a speedball paintball environment, you can easily communicate with your teammate due to congested areas but to make the game dominate you should keep the discussion secret. You can also see that some people in speed did not like to talk while playing the game because your voice can easily identify your presence in front of your opponents and cause a target. In this only those players are successful which show more enthusiasm and sharp movement otherwise you will quickly be eliminated from the game.

In above headings, I already explain that the speedball is the game of full action and its strategies also contain fast gestures so can target the closer opponents and don’t have enough time for making the strategies, just need to sharp movement to have a good control on the game. Being a team you can make some strategies like standing positions of players, who will take the start for attacking etc but once the game has started then the only option you have is to move yourself faster and protect from opponents.

This is an assertive game and you need to cover your face using a 360 coverage paintball mask. In this field, the opponents target you very closely which increases the chances of your face damage due to high speed hit of paintball.

The gun used in the speedball environment is very colorful and beautiful which has capability of speedy firing. You can estimate the performance of a speedball gun that can fire 45 to 55 paintballs within a seconds. If you want to perform well in the whole game then you should use a high end electro-pneumatic gun with a force feed hopper for heavy firing.

During the game it is important to wear a pad to cover your elbow and knee as a safety purpose before entering the game.

Benefits And Drawback Of Speedball

Benefits And Drawback Of Woodsball

Both environments are good to play, It depends on my mood. Sometimes I prefer to play in the woodsball field and sometimes I like to play speedball but mostly I play strategic and long lasting games. The main thing I like in it are:

As we know, different people have different natures like some people want to play a strategic game in a natural environment and some people want to play in aggressive mode with full action. In a speedball game you ultimately go into the action because your opponent is near to you. You can also play many games in a few hours due to their limited area and it’s also called a first time game.

If you want to play a long and strategic game with a great number of players then you should play a woodsball paintball game. It contains woods, rivers, stones and close to native things, moreover it has guns which resemble the military and the players feel army soldiers when they come in the environment with military type weapons, but again i say it is time taking and you feel every second of the game.