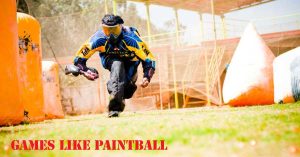 Everyone is well aware of the paintball game which is popular among different age groups of people, such as kids, teenagers and youngsters. It is a team shooting game in which members of one team aim to eliminate the other team with spherical gelatin capsules filled with paint.

People play for fun or as an extracurricular activity to relieve workload and other pressures, but it is not safe if you go out to play without protective gear. So if you play paintball you should follow their rules and wear all the necessary items to protect you, or if you want some change in your life and want to explore more games like paintball then read more and enjoy the article.

One of the most popular alternatives to paintball is airsoft, which is most similar to paintball in terms of rules, equipment, field, etc. In this game we use plastic pellets instead of spherical capsules, the shooting speed of airsoft guns is 590 feet per second which is very fast and damaging if it hits to our body parts not covered by protective gears.

Airsoft isn’t much different from paintball, it’s the same, teams try to defeat opposing players with their shooting guns, pellets are small and light in weight due to which they have high speed when they are fired from guns and leave a deep mark when they hit the human body.

Like all shooting games, it requires a lot of protection and safety, but it does not cause any serious health injuries, but at the same time it is not good/safe for children. Shooting guns are most attractive to kids and they are attracted to play with them, but as a responsible parent you need to stop them, there are other games for them that we have suggested, they can choose any one of them.

Laser tag is another popular shooting game that we consider an alternative to paintball that can be played by people of all ages, from kids to adults. This is a fun shooting game in which an infrared light is used as a bullet.

Some downsides to this game are that it can be quite expensive to play as it costs a lot to maintain equipment. You can also play laser tag in the indoor dark area, but be very careful or you might trip and fall, which can hurt you.

Laser tag is really fun and brings out the creativity of kids. It’s good to get kids involved as they love to form their own team for the game and design different maps themselves.

Archery Tag is a great alternative to paintball and much better than airsoft and other shooting games, as it is safe and painless and a great source of enjoyment. How is it safe? Bow and arrow is being used as a weapon to tag rival players, the arrows are tipped with foam, so it protects the players without getting hurt.

Being a safe game, it is recommended for children and/or players under 10 years of age but requires more skills to shoot the arrow at the target (more practice is needed to perfect). It is not very popular among them as they prefer to play games with guns instead of bows and arrows.

This requires less protection, but eye protection is essential with a helmet, as arrows are likely to hit the eyes even though they are tipped with foam.

The rules and field of the game are similar to paintball, playing different game modes, players will try to eliminate opponents by shooting arrows from a bow in direct “team deathmatch” games or games based on specific scenarios.

Another game similar to Nerf paintball, players are less likely to get hurt or dirty. So those looking for an alternative to paintball for fear of getting dirty or getting hurt can opt for Nerf. The game is usually played in an indoor arena with hiding spots, using the classic Nerf guns to shoot foam darts with a soft plastic tip.

Of course, this game does not cause much harm, but it is important to protect the eyes, which are such a delicate part of the body that water starts flowing even with the finger flick.

This team sport has the potential to give you an adrenaline rush like paintball without the fear of serious injury.

With paintball, no physical contact is allowed, however, unlike paintball, intentional shots to the face are not allowed.

Nerf tag is usually as fast as a game of speedball.

Just for safety purposes we can cover our face with a mask/helmet, it is not necessary to cover the rest of the body as it is not so dangerous. Most people play this game in formal clothes like shorts and t-shirts and they feel safe in them, even children can play this game freely.

Reball is also very close to paintball, the game uses rubber balls that are reusable because they don’t explode like regular paintballs. Be careful about your safety, this game needs to use safety equipment without any compromise, otherwise it will leave marks on you because these rubber balls hurt like paintballs.

It is not recommended for kids but is a good option for adults who want to play paintball without the mess/paint everywhere.

It is the perfect alternative to paintball for kids and my personal favorite game, I have played many times with my nephews. This game is played with a water gun filled with water, it is played with kids only for fun, mostly in summer to cool down and balance the temperature.

Team players attack opponents with their water guns and drench them, but have no rules like paintball or other shooting games, which can be played in any outdoor area such as a home lawn or park.

No safety required and best for kids.

Gel blasters don’t stain you, your clothes, and play areas, with paint like paintball so people prefer it more. Kids who want to take up paintball in the future can start with gel blasters to gain experience using the equipment. This game uses gel pellets instead of paintballs that are pre-soaked in water, and cleanup is a breeze when you’re done.

For fun and enjoyment without getting hurt, kids can play games like capture the flag, elimination, or create their own scenario with friends and family. There is no need to follow the rules of the game and they can play freely, and this can be good for building a base for kids to play big games professionally in the future.

Different age groups have different tastes and not all of them want to play paintball because of the risk of injury, the cost of equipment and the risk of getting dirty with paint. But they want to play shooting games with guns that are risk-free, painless, and without physical injuries. They are especially kids whose parents keep them from playing games like paintball, and that’s a good thing.

We’ve outlined some paintball alternatives that give paintball-like sensations without the injuries. You can try with your friend and family circle in your free time.