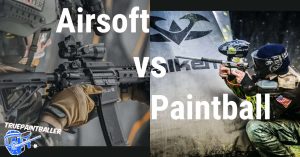 Airsoft is a simulated combat game in which participants strike with pellets starting from guns that resemble real firearms. It offers a realistic combat experience at an affordable price compared to paintball. Paintball is a popular and organized sport, in which participants hit each other using paintballs, starting with a special paintball gun.

Most people find it difficult to differentiate between these games because they look alike. Players from both sports teams use guns to shoot at each other and eliminate as many opponents as possible to win the game. We are here to explain the basic differences between Airsoft and paintball based on principles, tools and to decide which is best for us.

We present you a complete comparison chart which gives you a better answer about your confusions. We will learn by comparing their benefits and cons, rules, cost and popularity, which is beneficial for us.

We first examine the advantages and disadvantages of airsoft and paintballs to justify which is more suitable for us.

What is Airsoft :
It’s a team game in which participants eliminate opposing players by tagging them with spherical plastic pellets that are fired from Airsoft guns.

Airsoft Guns :
Airsoft guns look very similar to firearms, which is why people are most attracted to Airsoft, it is difficult to distinguish the two from a certain distance unless you touch it. To distinguish between these two guns, there is an orange cover on the top of the Airsoft gun.

You can find many features in Airsoft Gun, especially its magazine which has the capacity to hold 400 to 2500 pellets at a time, which gives comfort to the players and does not require repeated loading.

Realism Airsoft :
Airsoft is a more realistic game, the atmosphere is the same as in a military camp. In addition, you have the same tasks that you do as soldiers to protect your village and your family, the players take it very seriously.

Hardware Airsoft :
Airsoft guns usually need to be upgraded to be good, as they break very easily.

What is Paintball :
Paintball is a competitive team shooter game in which players hit opponents with spherical jelly capsules to keep them out of the game, called paintball, which breaks when hit.

Paintball Guns:
Paintball guns are different from airsoft, they are stylish as well as durable, their color and hopper are enough to recognize them. It comes with various varieties but not more than airsoft, they run with CO2 tanks or compressed air and a large hopper in which we have to load paintballs (50-200 paintballs holding power) to shoot anything.

Realism Paintball:
In paintball you will have colorful paintball markers and paintballs to hit your opponents, many players prefer paintball for fun and entertainment.

Hoppers have paintballs which operate at different speeds, and readily available in any market, different guns holding the hopper up and in the middle or to one side.

Airsoft Cost :
Airsoft field costs 30$ per day, if you bring your own pellets you need to pay less, yes they allow you to bring your own.

Paintball Cost :
Paintball field costs 40 to 50$, it is only for the field, you need to buy paintballs separately, per 500 paintballs cost is 10 to 40$ but it varies from field to field. Read More

Airsoft Pain : Airsoft guns use small and lightweight pellets which come in two types, plastic and metallic, which do not have much effect. Airsoft guns have an FPS of 250 to 350 which is much higher than paintball guns, lightweight makes them less painful and due to the long distance and suitable thick clothing sometimes the players do not even feel that they have been shot.

Paintball Pain : Paintball guns use heavier and larger paintballs that have a greater impact than airsoft pellets, and are more painful. Paintball guns have lower FPS but paintball size is 17 times larger than pellets, which results in more bad effects.

Airsoft vs Paintball Accuracy : Significantly, Airsoft bb’s are smaller than paintballs that have less wind resistance and therefore will be able to fly more and shoot more accurately. As BBs are small and white, they are less likely to be seen by an opponent before they are hit.

Airsoft guns come in a variety of accessories, including scoops and lasers that help improve your ability to aim and hit targets.

Airsoft Popularity : The reason why today’s young generation is more inclined towards Airsoft is because of its price, cheap equipment and they make it feel like the military. According to Google Trends, people are showing more interest in Airsoft, mainly because of its gun which looks very real.

Paintball Polularity : Both sports have fierce competition and have their own fans, but according to a Google survey, Airsoft gained more popularity than paintball in a very short time. There is a big difference between the two sports such as play area, equipment, clothes, bullets and especially guns, you have to play them both and decide for yourself which one is more suitable for you.

Which Costs More? Airsoft or Paintball?

We can measure the cost difference by comparing some of the expenses of these two games which will determine which game is more expensive.

These points are enough for us to determine that the game of paintball is more expensive than Airsoft.

Which is More Dangerous? Airsoft or Paintball?

As we all know Airsoft pellets are smaller in size than paintballs, and if we shoot at the same distance from both guns the paintballs weigh more which is more effective and harmful than Airsoft.

With different comparisons, you may have become clear about both sports but the best thing is that you need to physically try both sports to make any decision. Both are very interesting games and are good for our health, valuable games to spend time on them.

Both are friendly games and great sources of joy, plan with your family and you will definitely have a lot of fun. We conclude with this suggestion that you should try both sports on your own but follow the rules and all safety equipment to stay safe and happy.