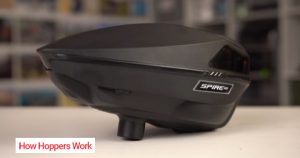 In this article, I will explain some questions related to the hoppers which are the part of the paintball gun that serves to store the paintballs and load them into the barrel. As we need many balls to play a paintball game, and it is not good if we run out of ammo in the middle of the game. So, the hopper allows many paintballs to be stored in the gun, so we can fire continuously without having to stop and reload every time.

Different Types of Hoppers and How They Work

There are different types of hoppers:

Mag Fed Hoppers: are spring-loaded magazines that feed new ammo into the barrel from below.

Gravity Fed Hoppers: are mounted above, using gravity to draw paintballs into barrels.

Cyclone-fed Paintball Hoppers: are similar to gravity hoppers but have 5-6 slots where the paintballs can drop and rotate like a revolver while loading a new bullet into the barrel.

Electronic Hoppers: are advanced, use batteries, and have the highest feed rates. If used with electronic paintball guns, they can fire faster than mechanical systems.

A gravity-fed paintball hopper is exactly what it sounds like: a basic paintball hopper attached to the feed neck of a paintball gun that feeds paintballs and drops them into the gun’s chamber. They work fine, but they only feed so fast: ten to twelve paintballs per second tops. Players who want to shoot faster with gravity feed hoppers will find themselves biting on paintballs or shaking their hopper every few shots.

The solution to this problem is an upgrade: an electronic hopper. Electronic hopper paintball guns use battery-powered motors that use paddles, fans, or feed pans to feed paintballs faster than gravity, allowing players to shoot fifteen to twenty paintballs per second and up.

How to Make a Paintball Hopper?

How to Clean Paintball Hopper?

Avoid water around electronics. Wipe the outside with a paper towel, if you want it even cleaner just wet the paper towel and wipe it. Dry it and put it back together and you’re good.

How to Paint Paintball Hopper?

Without knowing the specific composition of the plastic, your best bet is to use a high-tack plastic spray paint. Try to avoid ‘2x’ paints as they tend to be thicker than you want. Clean the casing first, then use fine grit sandpaper and try to remove the “gloss” from the casing and the original paint. If you’re using a bright color, it’s best to start with a white or gray base. Once the primer has been lowered, start applying the chosen color, spraying a very opaque first coat. Continue this process until you get the solid color you are looking for.

Although there is no single manufacturing rule that governs hopper specifications, nearly all paintballs made after 2007 have a universal hopper size. Most hoppers made before 2007 are not compatible because the feed neck can only accommodate a small range of sizes.

How Many Paintballs Do You Need for 2 Hours?

The average paintball player plays about 200 paintballs per hour, that’s 400 for 2 hours, but you can adjust this number depending on the level of competition. If you need to get a little more aggressive, you can figure out adding about 100 more.

How Long Will 100 Paintballs Last?

It depends on which scenario you are playing.

How Many Paintballs are in a Case?

A case of paintballs can usually hold 500, 1000, or 2000 balls but varies depending on the size of the balls. Half a day of paintballing requires about 500 balls per person, so a case of 2000 balls can be used by four people, which is enough for 4 hours of play.

What is a Cyclone Hopper for a Paintball Gun?

A cyclone hopper is a paintball gun feeder that uses centrifugal force to prevent paintballs from freezing in the hopper. The cyclone hopper spins the paintballs in a circular pattern, keeping them moving and preventing them from clumping, allowing them to enter the gun more easily and more reliably.

What is a Hopper Adapter for a Paintball Gun?

A hopper adapter connects to the paintball gun so the gun can feed paintballs from the hopper. This is useful for players who have mag-fed markers but want to shoot more paintballs without reloading their weapons repeatedly.

I am an energetic content writer living in the United States of America, working on many famous paintball blogs and other surfing sports all around the world with an open mind and honesty. My good thing is that I really enjoy the sun, beach and other hard work activities like swimming, boating and climbing.