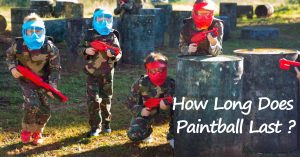 Here we clear some queries related to the paintball game, which new players are eager to know. It is their right to know everything about the sport they are starting to play, so that they can prepare themselves mentally or physically. With my experience playing paintball, let me tell you how long a paintball game lasts.

In fact, there are some types of paintball that have specific rules for winning and losing, so they also have different durations. Some of the games are following with their average time duration:

How Long is a Day of Paintball?

On normal days, paintball starts between 9:00 am and 5:00 pm, but most people arrive at their leisure and leave early. Don’t worry if you start fresh and reach the field on time and get less people, it’s natural, people start coming slowly, so keep in mind that the prime time of playing paintball is between 10:30 AM to 3:30 PM which I observed with time

If you are a part of any paintball tournament you should arrive on time, people arrive on time and spend more time on the field, but if you are with beginners there is a possibility that they will arrive late and Go early because they are unaware of time importance in the game.

However, if you have your own team, you can play paintball for as long as you and your team members want to play. It is a good practice to join paintball teams so that you can confirm which time/day/date to play by contacting them.

How Long is a Scenario Paintball Game?

Scenarios Paintball game time/length is different in every paintball field as each has its own rules and timings, so you need to follow their terms regarding timings.

Normal length of a scenario paintball game is 24 hours, there are scenario games that last 16 hours, 32 hours, 36 hours, and all types of hours in-between.

This is the most popular game type in paintball, because the sole objective of elimination is for all players to shoot at each other until everyone is eliminated. Any remaining player is the winning team.

The way Attack and Defend is played is that one team defends its base and the other team attacks it. The team whose players remain, wins.

1-The first is to have one team bomb the other team while -defending their base.

2-Another way to play PTB is to have both teams deal with bombs and try to plant their own bombs on the enemy team’s base.

3-The third and final way to play PTB is to plant a bomb in the middle of the field and have each team try to grab it and plant it in the enemy base.

To play zombies, you assign one player the role of a zombie and then tell all the other players to hide somewhere on the field. Once all the non-zombie players have had a chance to find a place and hide, the zombies come out and kill the players one by one.